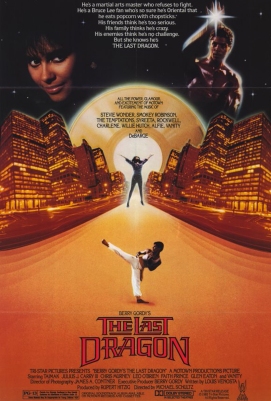 This post is based on a viewer request, which is being filled due to a donation to the Secular Student Alliance via my campaign during Secular Students Week (June 10-17, 2015). Thanks to all for your contributions!

Today’s feature is Berry Gordy’s The Last Dragon, a musical martial arts movie that has become a true cult classic.

The credited writer of The Last Dragon is  Louis Venosta, who only has a handful of other writing credits listed on IMDb. Outside of one short film, the only other things he has written are Bird On A Wire and a handful of episodes of the science fiction television show First Wave.

The Last Dragon was directed by Michael Schultz, was was also behind Car Wash and Sgt. Pepper’s Lonely Hearts Club Band. More recently, he has directed a handful of episodes of television shows like Arrow, Chuck, and Touched By An Angel.

The cinematography on The Last Dragon was provided by James A. Contner, who also shot Jaws 3-D, The Flamingo Kid, and Cruising. He has done a good deal of directing on television, including numerous episodes of Buffy The Vampire Slayer, Angel, 21 Jump Street, and Charmed.

The special effects work on the film is credited to Gary Zeller, who also worked on Scanners, Dawn of the Dead, Vigilante, Visiting Hours, and Amityville II: The Possession. The makeup effects were  provided by Allen Weisinger, who has done effects work on such films as The Wiz, Wolfen, Tootsie, Goodfellas, The Silence of the Lambs, and Scent of a Woman.

The music for The Last Dragon was composed by Misha Segal, who has also provided scores to such movies as The Human Centipede III, Ninja III: The Domination, and The New Adventures of Pippi Longstocking.

The Last Dragon was choreographed in part by Lester Wilson, who famously planned the choreography for movies like The Wiz, Saturday Night Fever, and Sister Act. 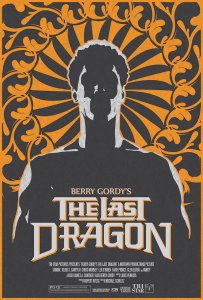 The plot of The Last Dragon  follows a young martial artist living in Harlem, who winds up on the wrong side of a local martial arts obsessed crime boss, while also also getting involved in a feud between a violent music promoter and a famous singer/television show host. He has to face all of these challenges while simultaneously working to attain the final level of martial arts mastery, known as “The Glow.”

The famous martial arts movie Enter the Dragon, starring Bruce Lee,  appears during a theater sequence towards the beginning of The Last Dragon, which was clearly a major inspiration for this film. Likewise, clips of Fists of Fury and The Chinese Connection pop up later in the film, as well as some explicit dialogue about the influence of Bruce Lee on the lead character.

The hit song “Rhythm of the Night” by DeBarge was released as part of the soundtrack for The Last Dragon, and ultimately got as high as #3 on the US Billboard Hot 100.

The band LMFAO, which was made up of two descendants of The Last Dragon producer Berry Gordy, references the film in their hit single “Sexy and I Know It,” with the lyric “like Bruce Leroy I got The Glow.”

The Last Dragon currently has a score of 6.8 on IMDb, along with Rotten Tomatoes ratings of 20% (critics) and 86% (audience). It is worth noting what accounts for that huge gulf: the Rotten Tomatoes critics score comes almost entirely from reviews that were written at the time of the film’s release, whereas the IMDb rating and Rotten Tomatoes audience score are continually updated with new submissions and input. The huge gulf between the reception it received from critics at the time and the reputation it has in the minds of moviegoers now is quite notable, and reflects its status as a cult classic in the opinions of many.

While it was a critical failure at the time, The Last Dragon managed to gross an impressive $25.7 million at the domestic box office, making it a financial success on a reported budget of $10 million.

Some of the songs featured in The Last Dragon are unfathomably awful, like Vanity’s “7th Heaven.” I don’t know what exactly went wrong there, but it just sounds awkward and really unpleasant, which is surprising for a movie that is supposed to be powered by the musical numbers.

Speaking of the songs, the one really successful entry into the soundtrack is “Rhythm of the Night,” which I mentioned previously. However, it winds up getting obviously shoehorned into the movie, which grinds the plot to a halt for the duration that it plays. Theoretically, the soundtrack is suppose to accentuate the movie, and not deliberately distract from it, which is how the song winds up functioning here.

The villain of the film, Sho ‘Nuff, is a fantastically hammy adversary for the stoic hero, ‘Bruce’ LeRoy Green, and his portrayal is probably the most memorable aspect of the movie. Personally, I wish he featured more prominently in the film, as he seems to disappear for a while in the middle of the story. On the flip side, Taimak clearly isn’t much of an actor (which is particularly clear when anything emotional is required of him), though he seems more than competent with the stunts and fighting. 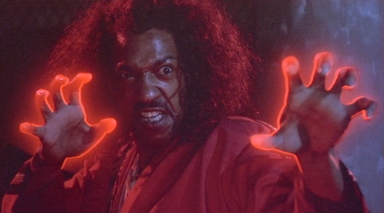 The Last Dragon has a generally flashy design to it all the way from the costumes to the sets, which is justifiably over-the-top given the tone and style of the movie. I could see how it could turn some people off, but I thought it all worked pretty well. 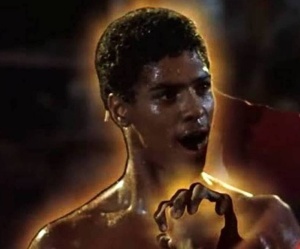 The fight sequences that pop up in The Last Dragon could be shot better to emphasize the action, but they certainly aren’t awful by any means. For the most part, the crew’s experience wasn’t with martial arts movies, so it is understandable that they weren’t experts at pulling that aspect of the film off. And, to their credit, it is for the most part good enough.

The Last Dragon rightfully doesn’t take itself too seriously, and audiences certainly shouldn’t either. This is a film that is, above all else, fun and entertaining. It isn’t meant to be any deeper than its surface value, and there’s not necessarily anything wrong with that. I mean, ‘Bruce’ LeRoy? We aren’t dealing with subtlety here. But honestly, who is complaining? The movie knows exactly what it is, and leans into that identity.

Speaking of which, naming the central character ‘Bruce’ LeRoy was a nice homage to the countless Bruce Lee clone movies that flooded the video market after Enter the Dragon, which all seemed to use a permutation of the name ‘Bruce Lee’ for their lead.

Overall, The Last Dragon is a pretty entertaining flick that merges two distinct styles, though it certainly has a whole lot of flaws. However, most of them just contribute to the charm of the flick, and help build the ambiance of the movie being an honest Bruce Lee knockoff film. The Last Dragon is a fun ride that is worth checking out for bad movie fans, though it drifts into being too self-aware at moments to appreciate as an earnest good-bad feature. Regardless, it is plenty of fun.