The screenplay for Fortress 2 was written by producer John Flock in association with Peter Doyle (Leningrad), with story credit going to original Fortress writers Troy Neighbors and Steven Feinberg.

The director for Fortress 2 was Geoff Murphy, who was also behind such movies as Freejack, Young Guns II, and Under Siege 2: Dark Territory.

The cinematographer for the movie was Hiro Narita, who shot flicks like Hocus Pocus, Star Trek VI: The Undiscovered Country, Honey, I Shrunk The Kids, and James and the Giant Peach.

The music for Fortress 2 was composed by Christopher Franke, who has also scored shows and movies like McBain, Babylon 5, Universal Soldier, and Green Street Hooligans.

The plot of Fortress 2 is summarized on IMDb as follows:

7 years after the original Fortress movie, Brennick and his family are still on the run from the Men-tel corporation. A group of rebels attempt to gain his support but he refuses, wanting to focus on his family. A raid follows and Brennick along with the rebels are captured and sent to a new, more sophisticated fortress prison in outer space. But Brennick’s not a man to give in easily, and with a 10 year old son waiting for him back on earth, he’s going to pack some serious assault on the evil corporation.

Fortress 2 was absolutely blasted by critics and audiences alike: it currently holds a 4.4 user rating on IMDb, along with Rotten Tomatoes ratings of 0% from critics and 21% from audiences. I wasn’t able to dig up any gross information, but it almost certainly came up far short of its estimated $11 million budget.

The original Fortress, if you ask me, is a pretty fun b-movie with plenty of upsides. I am a little surprised that it wound up with a sequel though, as it was hardly a big movie. Fortress 2 is, as with many sequels, a very similar movie to its predecessor, with only some slight twists on the formula. The idea of setting the second ‘prison’ (actually a forced labor facility) in space was a pretty good concept in my opinion, and it fits well with the futuristic design of the first movie. The biggest drawback of this sequel is a weaker supporting cast than the original, which boasted the likes of Jeffrey Combs and Kurtwood Smith in memorable roles. The biggest addition for the sequel is Pam Grier, who does ham it up pretty well in her limited villain role.

Overall, Fortress 2 is a pretty long way from good, but it is generally fun and entertaining. The design of the movie looks decent, in spite of some less-than-ideal low budget effects. It isn’t nearly as memorable as its predecessor, but it is perfectly serviceable for what it is. For fans of Fortress (and b-level sci-fi in general), it is more than worth checking out.

Ah, McKay Used Books. I covered the Nashville location a while back, but this time my travels took me to the Chattanooga location of the immense media store.

The chain is very small, with only three locations throughout Tennessee. It is distantly related to the similarly-titled Edward McKay Used Books chain in North Carolina, though the connection is apparently tenuous and ancient at this point.

McKay is distinguished both by its immense size and low prices: all of the locations are two stories, and packed to the gills with used media of every fashion. The bargain section for DVDs even features massive laundry bins filled with movies on sale for less than $2, which is about as good as a deal is going to get. 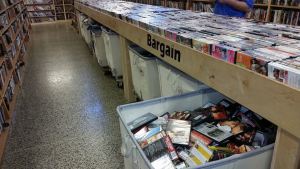 As always, I came away from McKay’s with a nice little haul of movies: 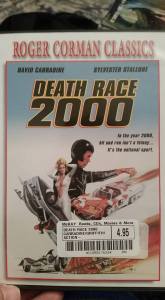 Death Race 2000, for those not familiar with it, is one of the key Roger Corman classics. It includes an early appearance of Sylvester Stallone, David Carradine in top form, and some social commentary scattered amid the gory action. There was a remake in 2008 by Paul W.S. Anderson that wasn’t entirely terrible, but missed the oddball tone of the original. If you haven’t seen it, definitely give it a shot.

Fortress 2 is a sequel to Stuart Gordon’s Fortress, which I covered a while back. I don’t know anything specific about it, though apparently the premise is that the jail is in space this time. I can only hope that things careen into something resembling an episode of Superjail!

Kingdom of the Spiders

This is another off-the-wall find. Kingdom of the Spiders is a little cult classic creature feature starring William Shatner just before Star Trek: The Motion Picture. I regard it as the middle ground between “young” Shatner and “old” Shatner, like the missing link in the evolution of Captain Kirk. Also, the movie features a boatload of live tarantulas acting as the monsters. No camera trickery or rubber suits here.

At first, I assumed that this was the sequel to The Mangler, the infamous tale of a murderous laundry folding machine. Unfortunately, this is actually the third movie in the series, and rounds out the inexplicable Mangler trilogy. I may have to dig up a copy of Mangler 2 before I give this one a watch. I mean, what if I miss some important plot information?

I absolutely love this movie, and it has proven to be a surprisingly difficult DVD to dig up. This was regarded as the professional debut of John Carpenter, who wound up conquering the late 1970s and 1980s with highly-regarded cult movies like Halloween, They Live, Christine, Escape From New York, and The Thing. However, the shock of Assault On Precinct 13 is what launched him into notoriety. This movie is high tension action at its best, capturing the menace and claustrophobia of a modern siege situation like no other movie has. Also, the soundtrack is fucking awesome. 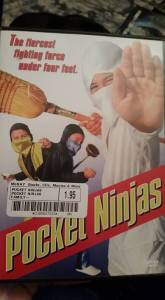 Pocket Ninjas is regarded as one of Robert Z’Dar’s most terrible movies, and that is saying a lot for a guy who made an impressive career exclusively out of being in shit movies. I haven’t seen it, but I am expecting something nearly unwatchable if the IMDb rating of 1.5 is to be believed.

Jack Brooks Monster Slayer is a horror comedy that I know nothing about, but apparently Robert Englund shows up in it at some point. I could see this going in a lot of different directions in regards to quality, but I figured that it was worth the gamble.