Today’s feature is one of the few films to star the now-disgraced wrestling superstar Hulk Hogan: Suburban Commando.

Suburban Commando was written by Frank Cappello, who also wrote the films Constantine, He Was A Quiet Man, and No Way Back. The movie was directed by Burt Kennedy, who was also behind the western comedy Support Your Local Sheriff and the John Wayne flick The Train Robbers.

The cinematographer for Suburban Commando was Bernd Heinl, who didn’t have a ton of credits to his name, but shot the movies The Little Vampire and Bagdad Cafe. Likewise, the editor on the film, Terry Stokes, cut a number of horror sequels over his career with Critters 4, Critters 3, The Blob, and A Nightmare on Elm Street 3. 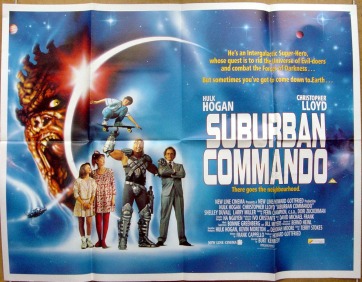 The makeup work on the film was done by Cheri Montesanto-Medcalf, who also contributed to the effects on movies like Tank Girl, Mr. Nanny, and RoboCop 2.

The score for Suburban Commando was composed by David Michael Frank, who also provided music for films like Poison Ivy, Out for Justice, and Hard to Kill.

The plot of Suburban Commando follows an expert interstellar warrior who becomes stranded on Earth, specifically in a suburban community. The hard-nosed soldier has to adapt to the customs of the area while repairing his spaceship, leading to a number of shenanigans. 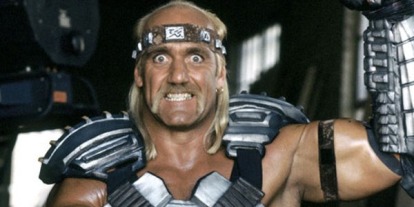 Suburban Commando was originally written for Arnold Schwarzenegger and Danny DeVito, but they chose to make Twins instead. This decision led to the screenplay being sold to another studio, and then significantly reworked into a science fiction story .

Tragically, a special effects worker (Michael Colvin) was killed in an on set accident involving a faulty trap door, which he was testing at the time.

Suburban Commando features a number of reused props from other productions, including guns from Masters of the Universe and the P.K.E. meter from Ghostbusters.

Suburban Commando was not well received upon its initial release, and it currently holds a 4.3 rating on IMDb alongside Rotten Tomatoes scores of 20% (critics) and 32% (audiences). Even worse, it only managed to gross $6.9 million in its theatrical run on an estimated budget of $11 million, making it a significant financial failure for the studio.

I like Christopher Lloyd, partially because he always seems to put effort into his roles, regardless of how bad the greater movie might be. Both Baby Geniuses and Foodfight! come to mind, but his delivery of the line “I was frozen today!” in Suburban Commando is the perfect example of how much passion and intensity the man is capable of injecting into absolute nonsense.

Hogan, on the other hand, is about as terrible as he is with any of his acting roles in Suburban Commando. For someone who seems to be a natural showman, and has spent his entire professional life as a glorified stage performer, he has always seemed awkward in from of a camera. I think this has at least a little to do with the lack of a live crowd when filming, which seems to be what actually gives him his motivation and energy to perform. It is kind of weird to even picture him on a quiet sound stage, surrounded by cameras and boom microphones.

Knowing that this screenplay was initially intended for the duo of Danny DeVito and Arnold Schwarzenegger brings up all kinds of “what if?” scenarios. It is impossible not to picture this movie with the Twins duo after you have the knowledge of this screenplay’s background. That said, I think Lloyd fills in his role just fine, and is probably as good or better than what DeVito could have pulled off. Hogan, on the other hand, just doesn’t have Schwarzenegger’s comedic chops, which is really saying something given his work on Hercules in New York and Jingle All The Way. But, for what it is worth, Schwarzenegger is more expressive than Hogan, and generally seems to have better timing and reactions for a comedic role. As bad as Hercules in New York is, Arnold has come a long way since then. Hogan, on the other hand, hasn’t ever really gotten better at acting since No Holds Barred. If anything, he’s gotten worse, given Santa With Muscles and 3 Ninjas: High Noon at Mega Mountain were actually later in his acting career. He was pretty entertaining as a voice actor in China, IL, but that was more self-parody than anything else. Now that the guy has been outed as a racist, publicly disgraced, and disowned by the WWE, it seems unlikely that he will be getting any more acting roles. Which, really, is for the best.

There is a really perplexing clip from Suburban Commando that has made the rounds on the internet, in which someone in the background of a scene appears to randomly toss their dog into the ocean. It isn’t relevant to the plot at all, and the context doesn’t help, but the image is certainly worth checking out the the sheer bizarreness of it.

Suburban Commando does have entertaining moments to it, but in general it is a pretty generic family-friendly pseudo-comedy. The plot is silly, the acting is bad, and even the music is pretty atrocious throughout. However, I think it is worth checking out for bad movie fans, at least for the novelty value of it as a Hogan/Lloyd team-up that literally nobody wanted. Also, Larry Miller always seems to be delightful when he shows up in a movie, and certainly doesn’t phone it in here as Christopher Lloyd’s sketchy boss.