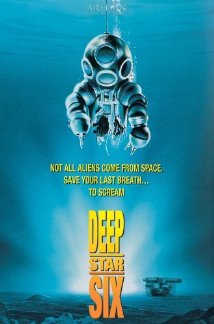 DeepStar Six was written by two people: Geof Miller (House IV) and Lewis Abernathy (Terminal Invasion, House IV), neither of whom have many other writing credits of note.

DeepStar Six was directed and produced by Sean Cunningham, who was also behind Friday the 13th, The New Kids, and Spring Break, and also acted as a producer on Jason X and House.

The cinematographer on the film was Mac Ahlberg, who also shot such films as Re-Animator, King of the Ants, Evil Bong, Good Burger, Space Truckers, From Beyond, Dolls, Trancers, Ghoulies, and House.

The editor for DeepStar Six was David Handman, who also cut Jason X and Wishmaster, and served as assistant editor on Footloose and Staying Alive.

The music for the film was provided by Harry Manfredini, who also provided scores for House, Swamp Thing, Friday the 13th, Wishmaster, Jason X, and The Omega Code. 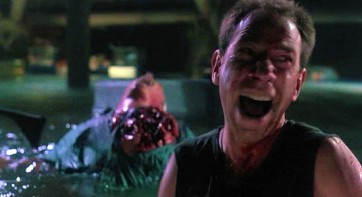 The plot to DeepStar Six follows the population of an experimental deep water military colony that comes under attack by a mysterious sea monster.

DeepStar Six kicked off the 1989 deep sea sci-fi boom, which also featured Leviathan, The Abyss, The Rift, Lords of the Deep, and The Evil Below. However, the early bird failed to get the worm on this occasion: the film just barely broke even on its theatrical run.

Robert Harmon (best known for The Hitcher) was initially going to direct the film, but left the production before filming. Cunningham, who was set to produce, took on the directing role as well.

The reception to DeepStar Six was pretty negative, likely due to unfavorable comparisons to the similar, more impressive films The Abyss and Leviathan. It currently holds a 5.1 rating on IMDb, along with Rotten Tomatoes scores of 0% (critics) and 22% (audience).

I noticed from reading around that some more recent reviews of DeepStar Six compare it to 1998’s Sphere, which strikes me as a genuinely more similar movie to DeepStar Six than both of its major contemporaries, The Abyss and Leviathan.

The monster isn’t nearly as impressive as the bizarre concoction in Leviathan or the creatures from The Abyss, and that makes for a pretty significant comparative weakness. Personally, I thought it just looked like a Graboid from Tremors. The cast also isn’t nearly as deep for DeepStar Six as the other two movies, though I absolutely love Miguel Ferrer going increasingly off his rocker in this film. 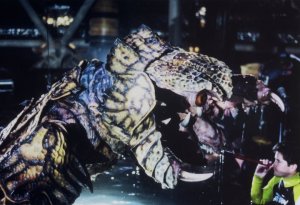 Overall, DeepStar Six isn’t an awful flick, it just pales in comparison to its peers. If this had come out a year or more earlier, people probably would have been less harsh to it. That said, it is also far from fantastic: the pacing is certainly not great, and most of the components of the film are mediocre from top to bottom. It doesn’t deserve the abysmal reputation that it has accrued, and I think the more recent reviews and ratings of the film reflect that. This movie isn’t garbage, it is just middling, and to a certain degree a victim of its historical context.

As far as a recommendation goes, the only thing I loved about this movie was Miguel Ferrer’s over-the-top performance. The story plods along, and feels like the broad-strokes plot of Deep Blue Sea stretched to its absolute limit. The movie works fine as background noise if you just want to have something on Netflix, but it isn’t something people should particularly seek out.